Just got back from the 2010 SXSW conference.   Another great year.

Digital:   We’ll, it’s here to stay.  Some estimates were that the digital attendees and exhibitors doubled from last year.  It’s becoming the premier conference for new digital endeavors and applications.  Ad:Tech, watch out.

Film:  Still no luck finding a producer to develop Permanent Temporary (the film or series).

Maybe next year.  Bumped into Seth Myers (SNL Weekend Update), im a fan.  Did not actually see any films… waited in lines but never got into any of them.  Too popular I guess.  Beer and music were acceptable alternatives. 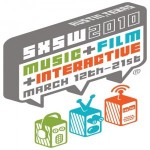 All in all good times, but several times I overheard that this might have been the year that SXSW “jumped the shark”.  It might have just been people trying to sound cool and wanting to use the term “Jumped the Shark”.  Who knows.

This entry was posted in Uncategorized. Bookmark the permalink.